Alan Bean Is Anyone Out There? 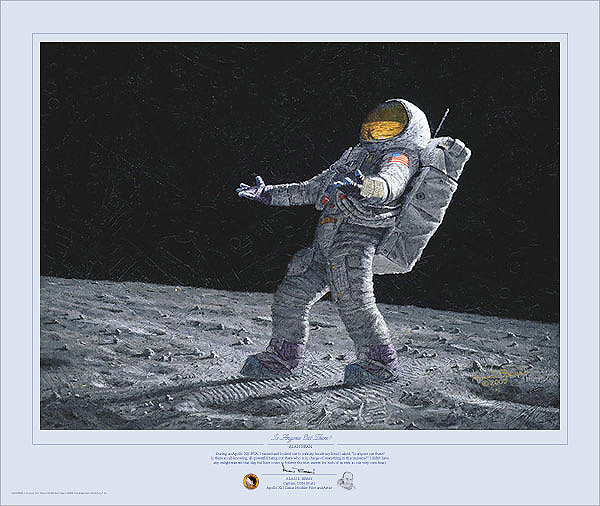 'Is Anyone Out There?' by Alan Bean

Since we first walked erect, it has been a conviction of mankind that in some fashion, someone, something, has inhabited the heavens. The Space Race itself was as political as it was strategic, yet at its soul, what captured the hearts and minds of the world at large was the possibility of coming one step closer to answering the question stirring within us all for millennia “Is anyone out there?”

40 years ago, on November, 14, 1969, Lunar Module Pilot Alan Bean, with fellow Apollo 12 astronauts, Commander Charles “Pete” Conrad and Command Module Pilot Richard Gordon, left Earth for the Moon. Five days later on Nov. 19th, Bean stepped off the lunar module Intrepid and onto the Moon’s Ocean of Storms and became the fourth human to walk on another planet. Yet for all the training, for all the data, for all the simulations and discipline, one of the simplest and most human of questions came to his mind, “Is anyone out there?”

We did send an artist to the Moon and it is no small matter of pride that we are able to call him a member of The Greenwich WorkshopFamily of Artists. Alan Bean paints the Apollo missions from a perspective no other can: as one who has been there. His paintings were on display in a one-man exhibition at the Smithsonian Air and Space Museum in Washington, D.C. “Is Anyone Out There?” was a center piece of the exhibit and perhaps its most commented upon painting. We selected it to commemorate the 40th Anniversary of Alan Bean’s lunar flight because it epitomizes that simple thought that took man to the Moon, “Is there anybody out there?”.

All design and images © moonpans.com